In this post, I want to talk about how we can automate our integration process using the Gitlab army tool. More specifically, how we can create a new release of our software, update the corresponding files that reflects the version, and create a new docker image.

For this example, we have a python/django application and Docker as containerization tool.

Starting a CI process in gitlab is super easy, you just need a .gitlab-ci.yaml file that contains stages and jobs configurations. You can find more info here.

For our case purpose, we define three stages with one job each one.

Define a clear development workflow is crucial for our goal. It gives a clear vision and a tidy way about how developers should work. We have defined the following the flow and probably you are familiar with it:

In order to be able to change files and push new changes with Gitlab runners, we need to have a ssh key and configure a git user.

First, let's create a ssh key. The only requirement is to create it without a passphrase.

The previous command will create a private and public key under the files deploy_key and deploy_key.pub. We will use them later.

For the git user, we need an email and username. You can choose whatever you want, in this example, we choose ci-runner@myproject.com and admin respectively.

Now, we need to create three environment variables that will be visible for the runners. They should be created in the variables section under settings/ci_cd:

Create SSH_PRIVATE_KEY, CI_EMAIL, CI_USERNAME variables and fill them with the private_key, email and username that we have created.

An important thing is to unprotect the private key, otherwise, the CI will raise errors.

The latest step is to create a deploy key. To do this, we should create a new one in the section settings/repository and fill it with the public key generated before. Check Write access allowed, otherwise, the runner won't be able to write changes to the repository. 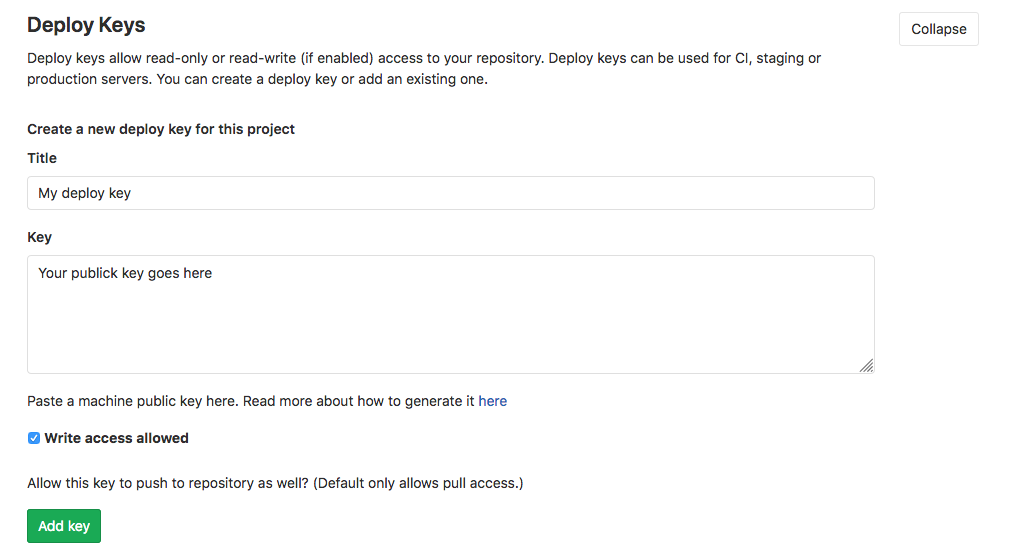 If you have more projects under the same organization, you can reuse the deploy key created before, but you will have to repeat the step where we created the environment variables (ssh key, email, and username).

Let's start with a basic configuration for our pipeline:

So, every time that a developer push to any branch the test job will be executed.

Time for the bumping. Below, we are defining a new job to auto bump a new version. The important steps are setting the ssh key, configure git, execute the auto bump command, push to master branch and upload the new version to gitlab artifacts. See the comments next to each line:

Now, let's add the publish job to create a new docker image and push it to the registry:

Because we can not pass variables between jobs, we are using artifacts. You can avoid using artifacts configuring git again in the latest job, then pull the latest changes that include the last commit that bumps the version or simply combining auto-bumping and publish into one job.

After merging with master we have the final result: